All Aluminum Vs. Aluminum/Copper Coils: Which is Better? 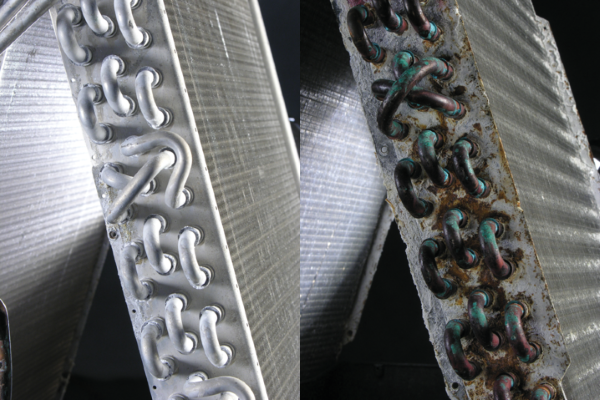 Which is better has been debated between HVAC contractors for over a few decades. In the image above on the right, you have an aluminum/copper (mixed metal) evaporator coil, on the left an all aluminum evaporator coil. As you can see the coil on the right has quite a bit of corrosion, and the one on the left has barely any corrosion. This is for several reasons. First, the all aluminum coil on the right has the natural anti oxidation properties of aluminum. The coil on the left does not. In fact, the mixed metal coil will actually exchange ions between the metals, causing the metal to corrode faster than it normally would on its own.

Why would anyone ever want anything other than an all aluminum coil? That depends on your expectation of service and parts. Long gone are the days where technicians went around repairing out-of-warranty coils to squeeze a few more years out of them. However, repairing an aluminum/copper coil is possible out in the field. This is due to the fact that the leaks will normally occur on the copper u joints. Repairing an all aluminum coil in the field is nearly impossible due to how difficult it is to weld aluminum.

This being said, in my experience 99.98% of people with a leaking evaporator coil would prefer to spend a little more to have the coil completely replaced, rather than a band aid repair on a rusty mixed metal coil.